Belgian Couple Marries in Las Vegas and Meet US Relatives For The First Time. Celebrating the one year anniversary of their Las Vegas Destination Wedding.

Our country is full of culture and life. Life that can trace ancestry and tradition across Oceans, land, and sea. We have all traveled here for different reasons and in different times but there is something beautiful about knowing your roots and discovering family you didn’t know you had. Last August a Las Vegas destination wedding became an unexpected and beautiful reunion of a family separated generations ago.

My Grandmother Yvonne married an American Army Air Corps Sargent on the twelfth of September 1945 in a church in Brussels, Belgium. They had met during the war and moved to the United States to establish their family in Ohio but that is a story for another day. This story is for the family they left behind in Belgium. Yvonne had a brother named Jean. Jean and his wife Laura had a son named Andre. Andre married Jacqueline and they had two wonderful daughters: Laurence and Christine. So if you follow the family tree that makes Christine my second cousin.

Christine met Hughues in a tea room in Brussels in 1986. A mutual friend introduced them and Christine was immediately drawn to his kind and charismatic personality but they didn’t start dating until years later. One day Christine was surprised by a small note in her mailbox that would be the catalyst of a lasting friendship and by the summer of 1990 a splendid romance. “First I brought my toothbrush.” Christine explained “Then very quickly, I brought the rest of my stuff and we never left each other.”

“Call me Please. I can’t [wait to hear from you] anymore”

This August Christine and Hughues are married only one year but their romance is celebrating 20 strong years. They had two lovely children, now grown and attending college. The have shared a wonderful life together. Hughues asked Christine to marry him on a couple occasions. She politely declined. She says in Europe it is common for couples to spend their whole life together without marrying. They had a wonderful, stable relationship as well as a perfect friendship and romance. Their priority had been to raise their children Guillaume and Aurane so she had never felt the need to make it “legal.” Then one day, after Hughues had asked many times, her response was “yes!” The happy couple decided that a family trip to Las Vegas and a classic chapel wedding would do the trick. They were married August 5, 2019 surrounded by an intimate group of family from Belgium and the United States.

“So you see, you can change your mind when you become older”

-Christine on saying “I Do”

I had never met Christine or Hughues in person before the week of the wedding but have connected via skype and Facebook over the years. Meeting them however, was like reuniting old friends. There was a warmth in our hearts and a strong connection i hadn’t realized was there until i felt it welling emotions inside of me. Happy Anniversary Christine and Hughues. I can’t wait til we meet again. 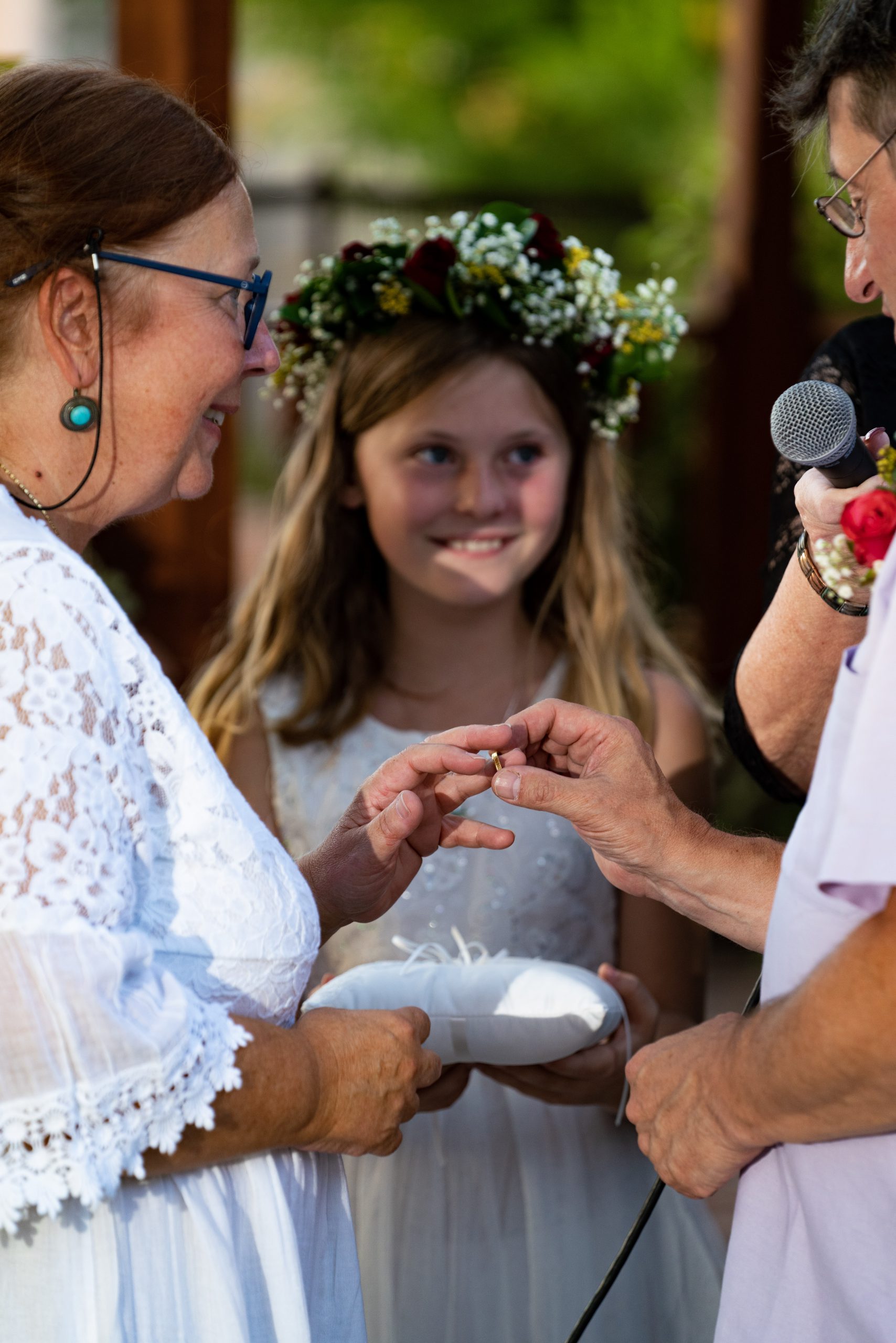 Hughues & Christine celebrated with a back yard wedding decorated with a simple and clean shabby chic design. The whole family sat at one long “L shaped” royal table which was great for letting the family mingle and chat. 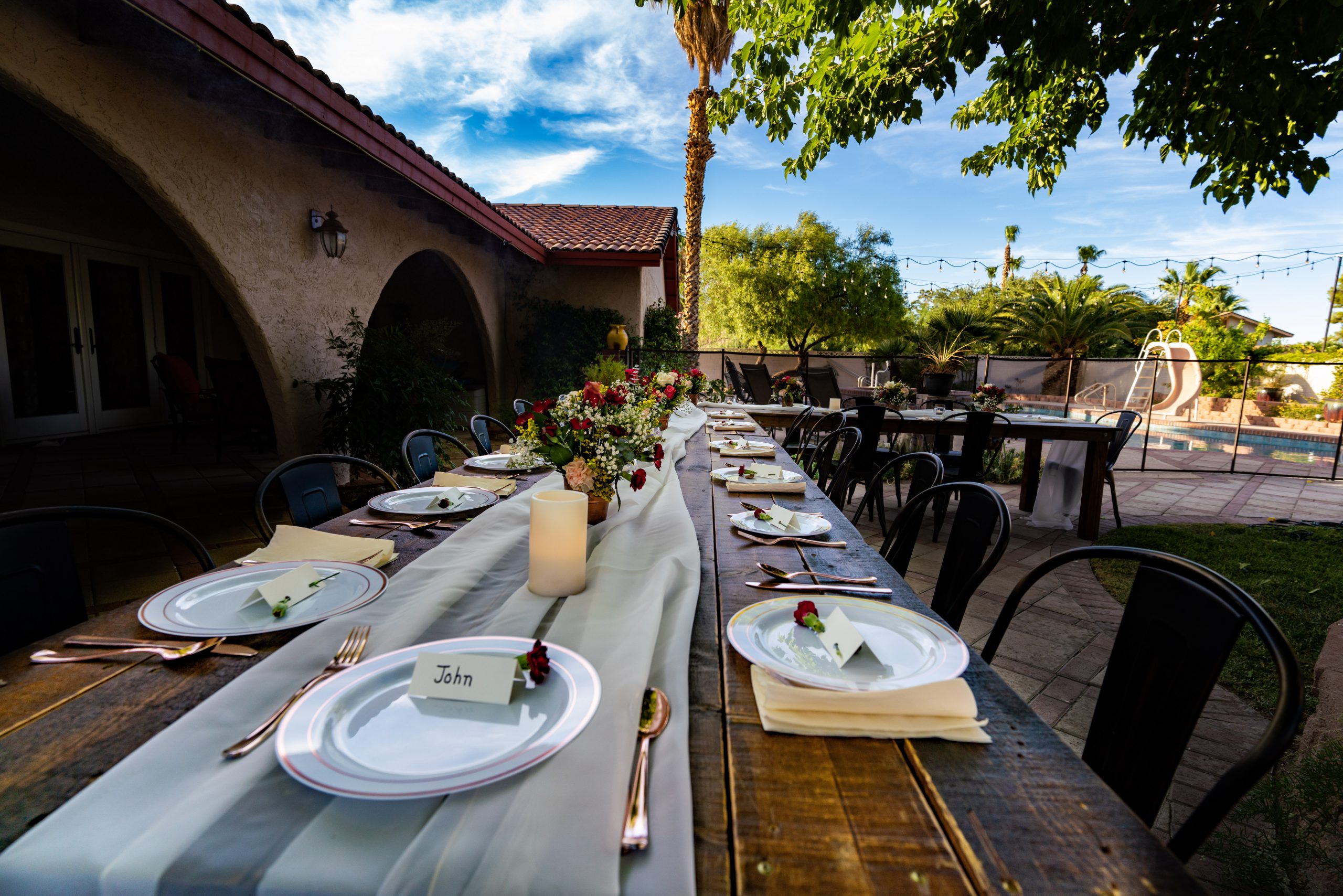 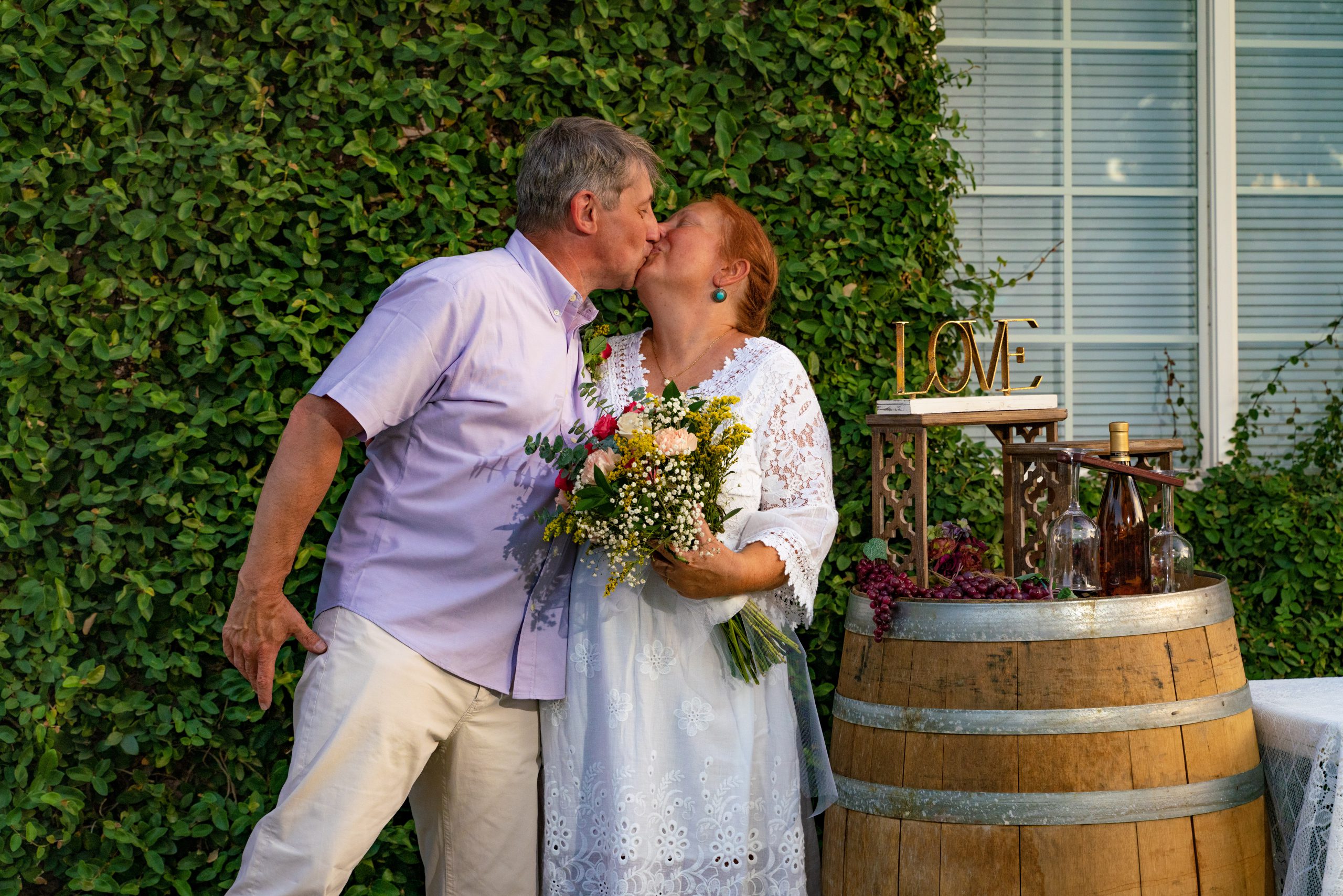 “Christine was made for me; I couldn’t imagine being with someone else. She’s pretty, smiling, tolerant, and very thoughtful. She calms me when I’m over excited or stressed. She is my better half”

The ceremony was done in French and English thanks to the multi-lingual Pastor Danielle in order to unite families from both cultures. In attendance were multiple family members from Belgium, Family from Las Vegas, as well as family who flew in from Ohio and the Pacific NorthWest. Separated by oceans and generations, reunited in fabulous Las Vegas.

Laura Covington is the Vice President of Bridal Spectacular Events, Inc. She grew up in the Wedding industry and has worked for Bridal Spectacular both officially and un-officially from a young age. Her first job (not in the family business) was for a boutique bridal salon. She has since served on the boards of Bridal Show Producers International and the Las Vegas Wedding Chamber of Commerce.